Obaseki, in an effort to establish his re-election bid, he officially defected to the PDP on Friday, June 19, at the party’s secretariat in Benin City, the Edo state capital.

He tendered his resignation from the party after meeting with President Muhammadu Buhari on Tuesday, June 16, at the State House, Abuja.

This decision came amid a frosty relationship and unresolvable differences between him and the immediate national chairman of the party, Adams Oshiomhole. 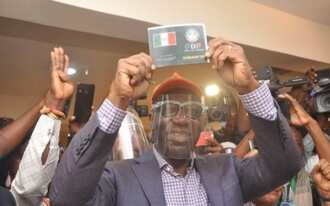 The political feud between the governor and Oshiomhole climaxed on Friday, June 12, as Obaseki was disqualified from the APC governorship ticket race.

Among top reasons, the governor was shown the exit door by Jonathan Ayuba-led screening committee over an alleged defective certificate in what looked like a final effort to shatter his re-election bid.

Oshiomhole later said the governor was disqualified because the APC is not a party of “big men” where rules can be remodelled to favour the interest of powerful individuals.

Speaking with BBC Pidgin, Obaseki said he was gang forced out of the ruling party as APC did not deem him fit for reelection four years after he contested and won.

“They said I was not qualified after four years. I qualified in the first time, but this time I was not. That was when I see that for APC, they are doing things anyhow.

“The leadership can just come and disobey the party constitution and court order. They are just doing as they like because they are in government.

“Since all of them said I was not qualified, I left and PDP which saw that I am qualified gave me the opportunity to join them,” Obaseki said.

Btbazes
I Bello Babatunde Moshood, The CEO of Btbazes.com, I hail from osun state, I was bred in Oyo state I'm Living in Lagos presently, I graduate from university of uyo in 2016, I start my blogging career since 2013.

1.6kViews
Related Topics:#EdoElections#EdoState#GodwinObasekiAPCPDP
Up Next

Waje: I Was Banned From The Choir After It Was Known I Was Pregnant