Bobrisky Reveal He Doesn’t Has P*Nis Anymore, No One Can Accuse Him Of Rape

The crossdresser, Bobrisky just make a revelation that he can never be accused of rape again because he longer has a p*nis.

According to the 28-year-old, if anyone accuses him of being a rapist, he would take off his clothes to show that he is no longer a man.

“Thank God say I don turn my former thing to kpekus now, I don join womanhood. If you like to accuse me of rape I go just off my pant show them oga police say na kpekus there. No laugh please. my own kpekus make sense pass my fellow women own self.” 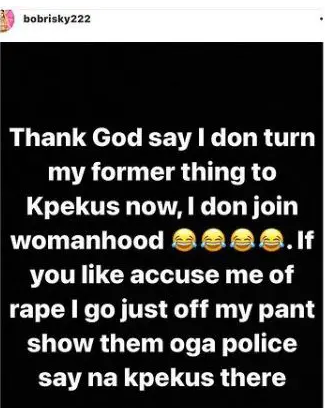 @jkontee_fancyface wrote: You will always be a man…change it 100 times if you like

@i_am_mills wrote: How many times u won change ur kpekus