Erica Drag By Fans Over Kissing A Man In A movie

“I hope you guys do some medical examination or tests before kissing people in movies? You can’t be kissing actors in every romantic scene because you are an actress.

If you are not careful, you will endup kissing all the men in the movie industry.”

“That is not good for a single lady like you, you have to be careful. Take a cue from Adesua Etomi, Omotola Ekeinde, Chioma Chukwuka and other. They don’t act romantic scenes.”

See the message below: 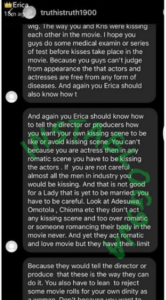