A Nigerian fashion designer has says “My God is faithful” after she pen down to her social media to narrate all she went through before she gave birth after 9 years of waiting.

The fashion designer who was identified as Tinuade Soile revealed how she had to  undergo 9 IVFs and suffered 3 miscarriages before God answered her prayers.

According to Tinuade, having gone through heartbreaks in the past, she  had to undergo a cervical stitch before she finally welcomed her first child.

Cervical stitch is a treatment for cervical weakness, when the cervix starts to shorten and open too early during a pregnancy causing either a late miscarriage or preterm birth.

Tinuade noted that she was  placed on 5 months of bed rest until the stitch was removed a week to the birth of her son which she welcomed on May 13. 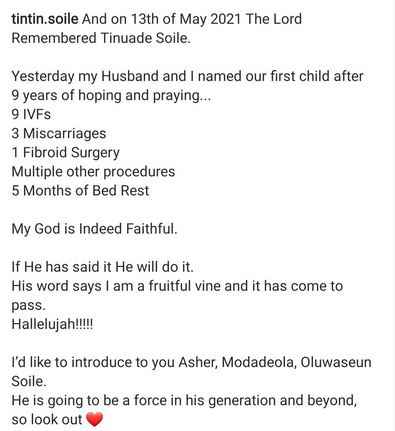